My wife and I were driving out West with our seventeen-year old nephew to look at colleges for him in Colorado.   His adolescent sense of direction had mandated that he spend the next period of his life in a clime with more snow and less humidity than what he experienced growing up.  And, we were making an effort to support his dream.

Having started in Atlanta, we had just passed through Kansas City on the second day of our trip.  Our nephew was already sleeping in what seemed to be his permanent state of rest.  Being early, the sun glowed behind us adding impetus to our journey.   Beginning as one of those late August mornings that hint of autumn, the air was light and cool and the sky forever clear.

The rolling hills of western Missouri had been flattened by the Kansas horizon, and the transition from city to countryside had been almost as abrupt, the steel and glass and concrete surrendering to the dark soil and its crops.  Our view was dominated by  monochromatic expanses  of green corn sprouting like fountains in their endless rows.   Occasionally, fields containing myriads of bright yellow dots of sunflowers provided happy interruptions as their heads turned in unison to greet the rising sun. 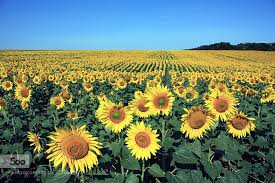 But the cornstalks dominated, standing in straight and narrow lines which spoke of daylong toil governed by rigidly defined rules.  Growing up in east Tennessee, I had wilted in similar fields while bearing witness to linear thinking that bore the bitter fruits of racism and homophobia.  Somehow in early adolescence, I began an internal revolt against the mindset that insisted that birds of a feather stay together.  My growth blossomed into a love of gardening with a preference for those that are riotous with color and blowsy with variety.  The exception appealed to my own burgeoning rebelliousness.

Continuing, we pierced the West’s vastness.  We were definitely in farm country.  Here and there with asymmetrical and random spacing, would be orderly farmhouses married to their obligatory silos and barns, all extensions of drabness.   Their somber appearance described functional but not aesthetic; their sides longing for more cheerful hues I thought.   My mind considered everything and nothing; my decades-ago past a backdrop for my thinking. 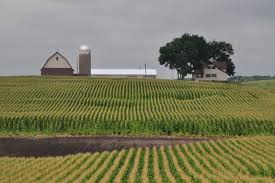 We approached a section of interstate that had a charge for use – – – a toll road.  We knew about it because our map had prepared us for its presence.  “LAST EXIT BEFORE TOLL” a bold sign warned.  We went past it not with temerity, but more with modest confidence and a timid spirit of adventure.  I drove the speed limit as I always did, continuing west inexorably as though commanded to do so.  In our somnolent state,  with senses dulled by vastness, it seemed that we went several miles before coming to a line of tollbooths that dammed the flow of traffic.

I slowed and approached one of the booths with care; I wanted to make sure that I did things correctly.  It seemed important that I appeared experienced with the highway even though this was my first time on this road.    Slowing, I pulled our car perfectly even with the attendant’s window, stopping a comfortable arm’s length away.

A female, who appeared to be in her early thirties, manned the booth.  I looked quickly to verify her gender because she wore no make-up and her hair was boyishly close-cropped, a careful part on one side with fine strands that curved back neatly above her ear.  With high cheekbones and a straight, thin jaw, her chiseled face gave her a fit appearance.  A plaid shirt loosely draped her upper body in a nondescript manner that disguised her breasts.  Her short fingernails were neatly trimmed, the better to handle money, I thought.  Her demeanor only subtly hinted at maleness.  I knew in an instant.

Our eyes made momentary contact.  Then, she cast an experienced glance at our car and told me the amount due.  “$2.75, please,” she said with a voice wrung dry of emotion by repetition and monotony.

What’s in like to live out here?  I asked her in my imagination.  My tone was friendly, inviting.  Instead I said, “Sure” and gave her the exact amount with my wife’s assistance of three quarters.

All right was the laconic response I envisioned to my query.  I’ll bet, I thought sardonically, out here in this conservative breadbasket of America.  But then I imagined she might look at me a little more carefully, allowing her calloused exterior to be penetrated a bit, and she would add as an afterthought: My partner and I hope to move out to some acreage with privacy . . . out in the country just north of here.  Her eyes glistened and I could see that her countenance was friendlier, happier with that intention.  She glanced momentarily in the direction we were heading as though looking for a rainbow.

I wanted to say exactly the right thing for her, something hopeful and supportive.  But I didn’t know how.  I relied on my eyes to overcome the brevity of our meeting, urging their language to do the talking.  I’ll bet it’s tough at times they said and then added, I wish things were easier for you.   I wanted to be hopeful, encouraging.  I wanted to say that I believed there was much more gray than black and white, that there were paths for new beginnings.

“Thanks for the exact change” she said, interrupting my reverie with mid-western clarity.  I wasn’t sure if her comment was rendered with a perfunctory politeness or had been colored by acknowledgement of my thoughts.  Only a few seconds had elapsed since we drove up to the window, yet decades of suppressed connections passed between us.  My “You’re welcome” was delivered with an awkward, lopsided smile.  Turning in my seat to face the highway, my eyes saw the road continuing, piercing the horizon, a long lance of pavement.  The narrow band separated the land’s overwhelming intentions providing a path, a route, an escape.  Brushing my arm supportively, my wife’s hand returned to her lap.  I hope that tollbooth operator knew that I knew and understood. 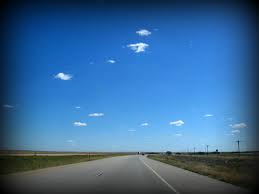 In the back seat, our nephew continued his dozing, oblivious to everything but dreams tinted with promise.  I wanted them all to come true.

9 thoughts on “Headed Out West”