Several years ago on a Labor Day weekend, our mountain neighbor, Smitty, dropped his pants in front of me. He and I were standing out in the meadow in front of his rural cabin when this happened. A few minutes earlier, my wife and daughter had disappeared for an afternoon walk.
Previous to his exposure, I had been talking with Smitty and his wife at their cabin. She was rocking the afternoon away on their porch and I was a few feet away on the grass. Smitty stood on the steps between us and dominated our three-way conversation.

White haired and with teeth too clean and even to have been his originals, he stood well over six feet and looked fit. Likely, I thought, from a lifetime of pursuing his outdoor interests. A semi-retired barber, I noticed he seemed to always have a toothpick in one side of his mouth ready for action on those beautiful choppers. His hair, begging for a brush, stood in careless, unkempt angles of white straw on top of his head.
Although we’d only met Smitty and his wife a couple of times, I’d already heard some of his stories before and knew he loved hunting and fishing. Sizing him up a bit, I guessed he had about fifteen years on my fifty-five.
Bragging in a matter-of-fact tone, he told me “I’ve kilt two bear with a .22. Shot one through the throat as he reared up on me and put a bullet inta the other just behint his ear.” I remember being duly impressed. Being somewhat inexperienced with weaponry, I would have thought it took a weapon of much larger caliber than a .22 to reliably stop a bear. Of course, I didn’t bother to state that I thought it only fair that animals being hunted for sport deserved the equal, albeit fanciful, opportunity of being adequately armed so that they could shoot back at their oppressors.

I made the mistake of asking about his fishing techniques on the Nantahala River which glided by clear and gurgling not fifty yards from where we stood. “You ever use worms?” I inquired innocently, knowing that was one of the more reliable methods for catching most fish.
“That’s nigger fishin'” he responded with a clear element of disdain. “Yep, it’ll work, but that’s nigger fishin'” he repeated, smirking for a moment. His choice of words rendered an internal cringe to my gut and reminded me that I was in his backyard of intractable prejudices and preferences. When you first get to know someone, the question soon comes up whether or not there is a possibility of becoming friends. I quickly checked the ‘no’ box for Smitty and myself. His wife rocked on unperturbed and compliant. The sound the rockers made were patient and softly rhythmic on the porch planks.
I changed the subject and remarked to her about the unusual beauty of an impatiens she had blooming in pots located at the bottom of the steps. Agreeing, she said, “I’m thinking about saving seed from them.” Guessing that it was likely a hybrid, I suggested that she make cuttings and over winter them in a sunny spot in her house. Wasting no time jumping into that discussion, Smitty promptly overruled us on that idea. I noticed that every time her husband interrupted, she would quiet until he had finished before proceeding with her own thoughts.
Wearying of the unbalanced, superficial conversation, I excused myself so that I could investigate the banks of the nearby river. Prefacing my departure with a half-hearted “See ya’ll later”, I waved and left. Despite our differences, I hoped that my comment would suffice as reasonably neighborly.
However, I had been poking along the stream for what seemed like only a few minutes when Smitty ambled up. Interrupting my reverie with good news, he told me “Tennessee beat UAB 20 to 14.” I had previously mentioned to him I was a lifelong Volunteer fan. His proclamation was made while exposing those pearly whites of his in a wide toothy smile that I didn’t much trust.

“How’d ya find out?” I asked. He reminded me that he had satellite TV in this remote area and had just tuned in ESPN for the latest college football scores. I thanked him for letting me know and then changed the topic again. I had noticed some non-native Rose of Sharon growing next to the river. “You and you’re wife must’ve planted these” I remarked.
“We shore did but the beavers have like to et ‘em up” he answered. His arm was pointing to some of the stumps left by their gnawing. The decapitated shrubs were making a valiant effort at recovery with rapidly growing shoots signifying some progress.
I pointed to a patch of Blue Lobelia growing next to the creek and asked him if he knew what that was. No, he didn’t know much ‘bout flowers. I then proceeded to show him Grass of Parnassus, Joe-Pye Weed, and Goldenrod. “What’s that orange flower there?” he asked while indicating one of the more common flowering annuals present at that late point in the summer.
“Jewelweed” I replied. “Hummingbirds love ‘em.” 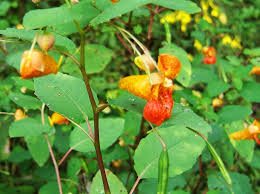 I didn’t bother to tell him that the sap of this native impatiens is antidotal for poison ivy as I had deduced that he was no more interested in plants than I was in hunting. Regardless, I was happy to have the satisfaction of having some knowledge of the natural world to counterbalance his experiences with hunting and fishing.
Despite my efforts to steer our conversation, he drifted back into hunting stories. As he began to speak, a Kingfisher flew low over the river, his call rattling, mocking. This bird could spot horseshit too. I broke eye contact with Smitty to focus on the bird’s flight and to get my neighbor to shut up but it was to no avail. Doggedly he continued. “I nearly got fucked up back in May when we ran down this boar.” 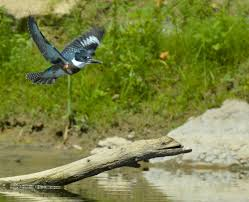 “No kiddin’” I responded with only polite interest.
“Yep, boars always git in thuhmos’ difficult of conditions when they’re cornered . . . briars, or canes, or dense growth of any sort. This ‘unhad been hemmed up by my dogs in a laurel thicket and I went in after ‘im. Tried sneakin’ up on ‘im from his backside, but he sensed me there and turned ‘round mighty damn fast and bolt me over like I wuz a bowlin’ pin. While I wuz sprawled on my back like an overturned turtle, that sumbitch got down at my ankles and started rootin’ up ‘tween my legs fer all he wuz worth, shakin’ his head from side to side, and tearin’ holes in my britches with his tusks! He wuz headed straight for my balls. ‘Shoot ‘im, shoot ‘im!’ I’s yellin’ to my huntin’ partner. And he did, emptyin’ a .22 Magnum into that fucker. The hog fell to one side and I rolled t’uther. ‘He’s fucked me up bad!’ I hollered to my buddy. Blood was a pourin’ outa my leg. Took several months to heal. Here I’ll a’showya.” With a flick of his tongue, Smitty quickly shifted that toothpick from one side of his mouth to the other as he glanced down at his legs and spread his feet apart slightly.
And I watched, stunned, as he undid his belt, unbuttoned his camouflage pants, and let them carelessly fall to just above his knees as though he were readying himself for the act of defecation. His scarred flesh confirmed where the boar’s tusk had penetrated for several inches along his inner right thigh stopping just short of his scrotum. Beginning just above his knee, a long and broadening red streak, climaxed by a quarter-sized purple dot of flesh commemorated the event. “You were lucky he didn’t tear your femoral artery” I remarked, while simultaneously thinking that I didn’t realize that anyone older than me still wore ‘tighty-whities’. Has Miss Manners addressed the proper protocol for what to say and do in such a situation?
My mind was racing to try and stay ahead of any further developments this encounter might hold. I was too taken aback by Smitty’s unabashed, prideful exhibitionism in that isolated, but open meadow to know what else to think.

Smitty agreed that he had experienced good fortune and kept his pants down a few seconds longer than I was comfortable with; cupping the mostly healed flesh with his hands as though it was a trophy. No way could I top that. Fortunately, he had just decided to pull his pants up just before my wife and daughter showed up from their walk. My family had come awfully darn close to coming to my rescue.
Any sense of decorum I had remaining had been scrambled and I don’t recall what I said to Smitty as I left to greet my relatives. But I do remember what I thought as I retreated to our adjoining property. He and I had some things in common: a Caucasian background with English surnames. And, we both could be correctly labeled outdoorsmen with an identical interest in underwear style. But that short list of similarities quickly evaporated. After that, our differences became a cultural divide that would be as difficult to traverse as the mountains which served as a backdrop for our respective properties. We might be neighbors, but that’s as close as we’re going to get.